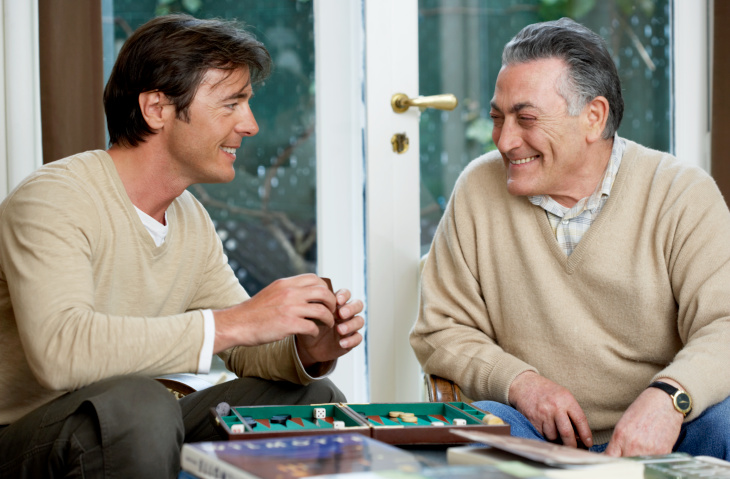 Prostate-specific antigen (PSA) is a protein almost exclusively produced by the prostate. Initially approved by the Food and Drug Administration for the purpose of monitoring the status of prostate cancer in 1986.

PSA has become an integral part of prostate cancer screening along with a digital rectal examination (DRE).Men with prostate cancer often have elevated levels of serum PSA which correlate with the extent of cancer spread. With the introduction of PSA screening in the late 1980s, there was a dramatic rise in the number of men diagnosed with localized prostate cancer about doubling a man's lifetime risk of diagnosis. Most likely also due to screening, currently about 80 percent of newly diagnosed men are considered to have a clinically organ-confined disease, the stage of disease that is potentially most amenable to cure. The recent publication of two large-scale studies of more than 250,000 men randomly assigned to scheduled PSA and DRE screening versus regular community care has led to uncertainty regarding the impact of screeing. While screening clearly increases the number of men diagnosed with prostate cancer, one study conducted in Europe found a 20% reduction in risk of death while a second study, conducted in the U.S., found no reduction in risk of death from prostate cancer. These recent results emphasize the importance of patients discussing the potential benefits and risks of PSA screening with their physician and making an individualized decision.

Once diagnosed, men with localized prostate cancer face the challenge of choosing among a number of treatment options. Several factors come into play when selecting the best treatment for an individual man with his own unique tumor. Tumor stage (extent of local spread) and grade (aggressiveness), PSA level (higher levels indicating a greater risk of cancer recurrence after treatment), and extent of disease (number of biopsy cores with cancer), as well as competing medical co-morbidities (other diseases that can affect life expectancy) and age at diagnosis (as most prostate cancers take many years to become evident and cause morbidity, the same tumor in an older man may pose a lower risk of causing problems in his lifetime), all play a role in the decision regarding the choice of therapeutic intervention.

What are the current treatment options for men with localized prostate cancer?

Surgery is one option for men with localized prostate cancer. Compared to other treatment methods such as radiotherapy and cryotherapy, a radical prostatectomy has an advantage of providing accurate local staging (determining the true extent of the disease including whether it has escaped beyond the confines of the prostate) as well as the potential for assessment of pelvic lymph nodes to determine if the cancer has spread to these nodes. For patients with prostate cancer pathologically confined to the prostate, the chance of cure with surgery alone at 10 years (undetectable PSA) is more than 90 percent. The risk of cancer progression in men with extracapsular disease (cancer beyond the capsule of the prostate gland) and/or positive surgical margins is much higher, ranging from 30 to 50 percent, and these patients may benefit from additional therapy. A recently-published randomized trial showed that for men with prostate cancer beyond the prostate at surgery, the addition of radiation given to the pelvis significantly improves the cure rate. . Although the incidence of operative complications with radical prostatectomy is quite low, the primary postoperative side effects are urinary incontinence and erectile dysfunction.

Radical prostatectomy is the only treatment which has been tested in comparison with another treatment (watchful waiting) in a randomized clinical trial, the best way to evaluate the true benefit of a treatment. In this study, conducted in Scandinavia, men with clinically-localized prostate cancer were randomly assigned to radical prostatectomy or to watchful waiting. In this study, men treated with surgery had a significant improvement in survival. Nonetheless, three additional observations were: (1) most men whose tumors were watched did not die from prostate cancer, (2) some men who underwent surgery did die from prostate cancer, and (3) about 20 operations were needed to save one life from prostate cancer. 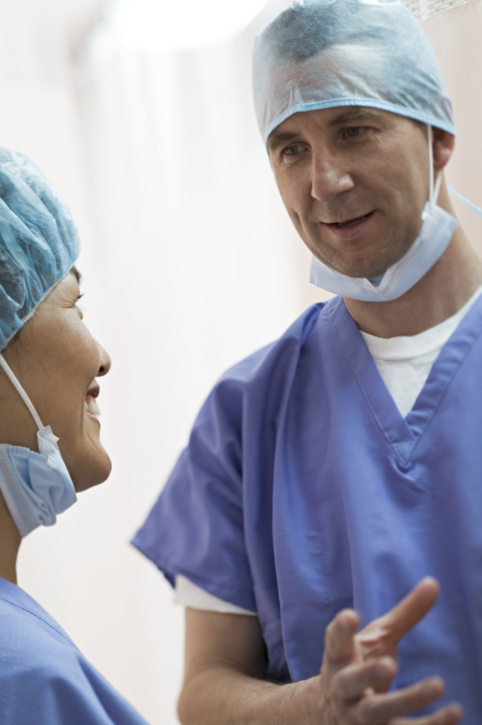 Open Radical Prostatectomy: In radical prostatectomy, the entire prostate gland is removed as a unit with the seminal vesicles and the nearest portions of the vas deferens. There are several different surgical techniques in performing a radical prostatectomy. The retropubic approach utilizes a midline incision below the umbilicus and allows simultaneous access to the prostate and pelvic lymph nodes. Based on precise anatomical delineation, the prostate gland can be removed generally with limited blood loss and preservation of the neurovascular bundles, which are responsible for maintaining erectile function.

In the perineal approach, the prostate is removed through an incision in the perineum behind the scrotum. By avoiding the pelvic vein complex which can cause significant bleeding during the the retropubic, laparoscopic, or robotic approaches, bleeding is uncommon with the perineal approach. Other advantages include precise urethra-vesical anastomosis (re-attaching the urethra to the bladder), a smaller incision, and generally less pain than with other approaches.

Open Radical Prostatectomy: In radical prostatectomy, the entire prostate gland is removed as a unit with the seminal vesicles and the nearest portions of the vas deferens. There are several different surgical techniques in performing a radical prostatectomy. The retropubic approach utilizes a midline incision below the umbilicus and allows simultaneous access to the prostate and pelvic lymph nodes. Based on precise anatomical delineation, the prostate gland can be removed generally with limited blood loss and preservation of the neurovascular bundles, which are responsible for maintaining erectile function.

In the perineal approach, the prostate is removed through an incision in the perineum behind the scrotum. By avoiding the pelvic vein complex which can cause significant bleeding during the the retropubic, laparoscopic, or robotic approaches, bleeding is uncommon with the perineal approach. Other advantages include precise urethra-vesical anastomosis (re-attaching the urethra to the bladder), a smaller incision, and generally less pain than with other approaches.

The main disadvantages include a higher incidence of rectal injury, difficulty of preserving the neurovascular bundles and a separate incision for pelvic lymphadenectomy (although few patients currently require lymphadenectomy due to their very low risk of lymph node involvement). Typically, the perineal approach is preferred in obese individuals or those with prior lower abdominal surgery. In general, few urologic surgeons have significant experience with this approach.

Robotic Assisted Laparoscopic Radical Prostatectomy: With recent advances in minimally invasive surgery and computer technology, the prostate gland can now be removed through several one- to two-inch incisions in the patient's abdomen. Robotic prostatectomy utilizes a surgical robotic system (a device that holds surgical instruments and a laparoscopic camera to remove the prostate gland through laparoscopic access. The primary advantage to this approach is less bleeding although transfusion rates do not appear to be different from open prostatectomy approaches when performed by an experienced surgeon. Initially, shorter hospital stays were seen with this approach but with improvements in open surgery, one-day hospital stays are the norm for the open surgery at many institutions.

Radiotherapy for prostate cancer can be divided into two types: external beam radiation therapy and brachytherapy. In external beam radiotherapy, a small amount of radiation is delivered in daily increments to the prostate, generally Monday through Friday over a course of 7 to 8 weeks. Currently, three-dimensional conformal radiotherapy (3DCRT) or intensity-modulated radiotherapy (IMRT) is used to deliver high-dose radiation to the prostate while minimizing toxicity to the surrounding normal structures such as the bladder and rectum.

Prostate brachytherapy is a radiation technique in which radioactive seeds are implanted directly into the prostate. The seeds are delivered through the perineal skin into the prostate using needles that are inserted into the prostate using ultrasound guidance. Both low-dose rate (but high-dose) permanent prostate seeds and high dose rate (HDR) temporary implants can be used to treat the gland successfully. Prostate brachytherapy is typically performed in an outpatient setting under either general or regional anesthesia. The procedure is usually well tolerated with a low risk of surgical complications.

The relative effectiveness of external beam radiation and brachytherapy appear to be similar for early stage prostate cancer. Some patients are offered the combination therapy in which both external beam radiation and brachytherapy are utilized. For men with locally advanced cancer and/or aggressive (e.g., Gleason score of 7 or more) cancer, androgen deprivation is also added to improve cancer control.

The main side effects of radiotherapy include bladder and rectal toxicities which can result in urinary and bowel dysfunction. Erectile dysfunction is also common and appears to increase with time after treatment. The long-term effects of radiation to normal tissues remain unknown though an incidence of secondary malignancy appears to be higher in this population.

Cryoablation of the prostate is a treatment in which prostate cancer is eradicated by freezing the prostate gland. Cryotherapy is administered in a manner similar to that of prostate brachytherapy; special needles called "cryoprobes" are placed into the prostate transperineally under the guidance of transrectal ultrasound. Argon gas is then used to create an "iceball" which results in cell death within the predefined area. Real-time ultrasound monitoring of cryoablation combined with the use of thermocouples reduces the risk of injury to the surrounding normal tissues.

Usually, the goal of cryoablation is to freeze the entire prostate but there is a growing experience with focal cryoablation in which only the region where cancer was detected is treated. Although prostate cryotherapy was initially offered for treatment of prostate cancer after failed radiotherapy, there is emerging data supporting its use as a single treatment option in men with newly diagnosed prostate cancer. Side effects can include pelvic pain, stricture and incontinence. Erectile dysfunction is also very common.
Androgen Ablation Therapy

Prostate cancer is usually sensitive to medications that affect serum levels of androgens. As such, androgen ablation can result in a dramatic reduction in cancer burden in the vast majority of cases. Unfortunately, most prostate cancers eventually progress after androgen ablation and ultimately become androgen independent. The 2007 AUA Prostate Cancer Guideline notes that primary androgen ablation as a single therapy should not be offered among standard treatment options for men with locally-confined prostate cancer. In the management of localized prostate cancer, the role of androgen ablation is usually limited to a neoadjuvant or adjuvant setting. Two most common scenarios are 1) to reduce the prostate size prior to prostate brachytherapy and 2) to sensitize malignant cells to radiation during EBRT. Randomized clinical trials suggest a survival benefit of hormonal therapy for high risk patients undergoing radiation therapy as well as for patients with nodal involvement with cancer after radical prostatectomy.

Prostate cancer is often a slowly progressive disease, and many men with prostate cancer will die from causes other than prostate cancer. Although acknowledged to be imperfect, tumor (grade, volume, PSA, stage) and patient (age and comorbidities) measures can be used to identify men at lower risk of disease progression during intermediate periods of followup. For men with lower risk cancer or for those for whom avoidance of sexual, urinary, and/or bowel complications are a primary consideration, active surveillance may also be considered.